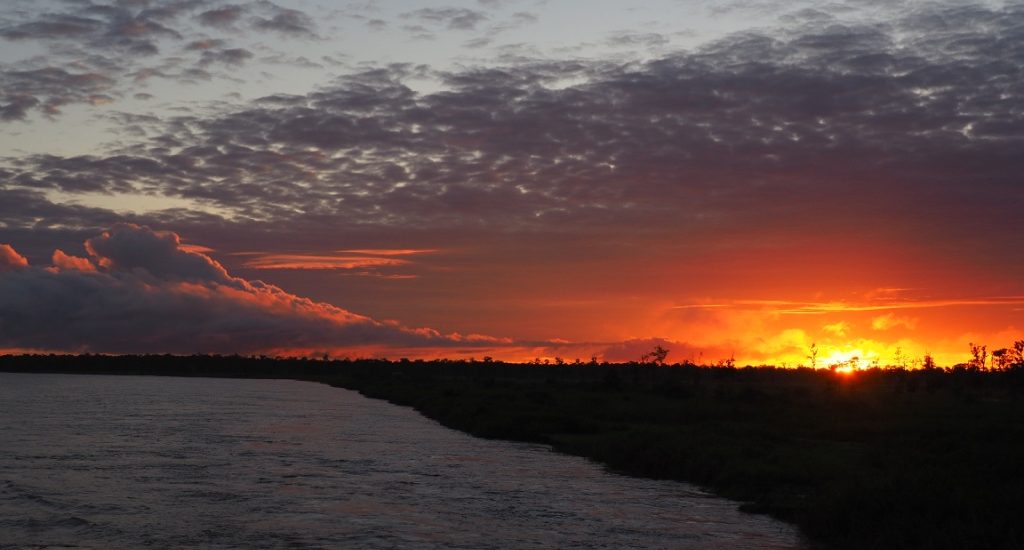 The day before leaving was pretty chaotic… of course it was Friday the 13th. What else would you have expected.

I forgot for the second time during my travels my favourite microfibre towel in a hostel (arghhhh), we messed up the right location of the port and had to find the right one. Certainly my mobile phone only had 12% remaining battery and it was just pure luck that we arrived just before it died.

Port of Manaus to Porto Velho

The port was at the other side of Manaus located in a rough neighborhood full of favelas. I did not have a good feeling and kept my fingers crossed that everything would be fine. Last year an Italian biker got shot dead in a favela in Rio de Janeiro and I certainly did not want to follow the example.

The boat was the first one tied up to the pier while the crew was busy to loading it up with different kind of construction materials and tons of matresses. When we found the captain we immediately tried to negotiate a price for the three of us… Marianna, Fury and me.

We just had one tiny problem… my credit card was not working and therefore I had no money but a hundred Reals. Luckily the captain accepted the first installment and I put my bike straight on the boat.

Furthermore, the harbour was charging an embarquing fee of 30.- Reals.

We went back again in town and organized the money (luckily after the 10th try it was working) together with a couple of other stuff for the journey.

Food on the boat

The first meal on the boat was a gourmet dinner, lol. I don’t know what it was but my stomach did not really agree with the offering and the next days I had several meetings with the bathroom. Otimo!

Every time a meal was ready the “food officer” was blowing her whistle and just like the pawlow effect my salvia just started to drip when hearing the sound, lol.

The Rio Madeira – Nature and Wildlife

The cruise was simply amazing and in fact much more beautiful than the Amazon River.

The river banks were full of life. I never saw such a huge variety of different plant and tree species. Simply incredible. When there was a gap in between the rainforest there were usually quite a lot of birds to see like herons or kingfisher.

I still can’t imagine how people can make a living along the river. It must be a simple and hard life while their income mainly comes from agriculture (cattle, vegetable and fruits) and fishery.

It seems people on the boat don’t know what to do with themselves. Many of them most of the time simply steer at something and whenever there is an extraordinary “thing” happening, people jump out of their hammocks and literally everyone is following the spectacle. Either it is a town, a big boat or especially food other people have brought with themselves.

Better than any big brother episode this live broadcast of the boat life would win all tv prices.

My birthday was rather unspectacular that day but well… who can say to have celebrated a birthday together with hundreds of other people together on a boat in the Amazon. In this case… yeah… it was special!

We decided to get off the boat one day prior our arrival in Porto Velho. We made a short stop at a town called Humaita where goods were unloaded and a couple of people left the boat, including us.

Marianna joined a group of people we met during the ferry ride and we wanted to catch up again in Peru.

Saving a complete day, I already arrived earlier in Porto Velho than anticipated. To my surprise I even rode a short part of the famous BR-319… of course it was only the paved road but I was still excited to have touched this motorbiker’s landmark. Such a shame that it was rainy season and I could not experience this adventure! Next time…

When arriving in Porto Velho I did not do anything anymore but grabbing a snack before getting to sleep. It was great to sleep in a proper bed again after nights of sleeping in a hammock. LUXURY 😀

Where to stay in Porto Velho

Richard Hotel – I found a nice hotel with a secure parking which was at the lower end of the price spectrum of Porto Velho. The breakfast was nice. The rooms were small but clean. Beds were comfortable and the breakfast was ok.

“Choose a job you love, and you will never have to work a day in your life.”