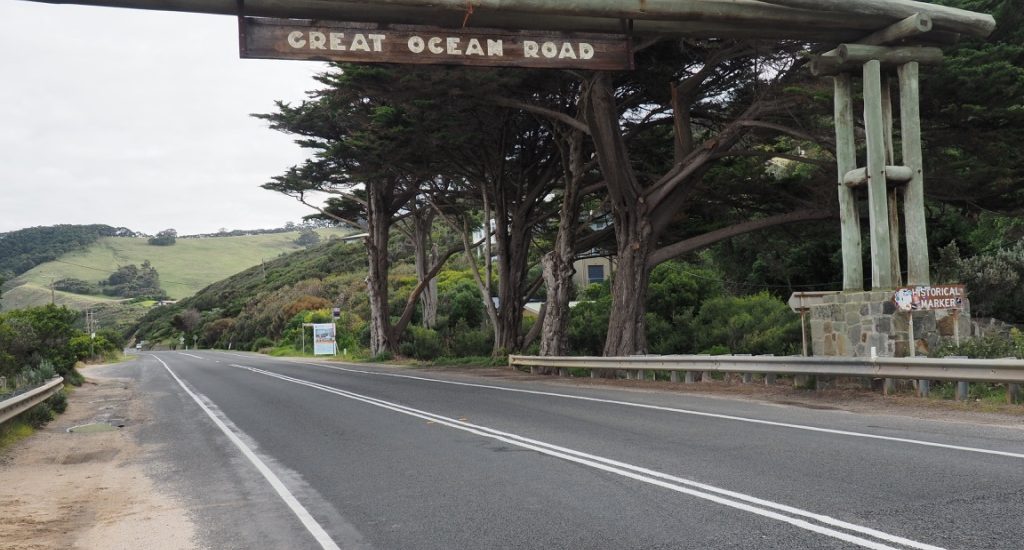 After I spent a week with my good old friend Luke and his family in and around Melbourne, it was time to hit the road again. Since I was doing highway 1 in California a couple of years ago I became a huge fan of road trips along the ocean. After doing my initial online research on what to do in Melbourne one of the highlights always popped up as the famous GOR – The Great Ocean Road.

Since this time I was traveling on a budget, I could not afford a dream vehicle such as a convertible Mustang or a Harley Davidson which I did highly enjoy in the US (articles to follow). Instead I was renting a mini car manufactured by KIA 🙂 I should not regret my decision and the small car of choice was a real go-cart which had a lot of grip in the rather narrow curves. It was a lot of fun and I was literally flying over the road, resulting in a speeding ticket which I should only be aware of weeks later when receiving an email by surprise. Luckily this did not happen to me in Switzerland, otherwise I would have needed to cut off a couple of months traveling. Fines in Switzerland are a serious  business 😀 However, It should have been proof enough that the road was a lot of fun and belonged definitely to one of the best coastal road trips I ever did.

The road trip can be in theory done in one day, but to really enjoy it you can take easily up to a week time, or even more. Unfortunately, the weather was not the best when I commenced my journey but most importantly it stayed dry most of the time. I decided to have my first break in the lovely town of Torquay and enjoyed a delicious breakfast and Italian coffee in the quicksilver flagship store and its bar respectively – the perfect place also for shopping of surf gear. The town and its beaches, especially the famous bells beach, offer world class surf and a chilled out “hang-loose” atmosphere. The waves still seemed a bit too high for my newly learned surfing skills and I skipped the physical activities and dedicated myself the road again.

Along the coastal highway on my destination to Port Campbell I stopped several times to breath in the spectacular views of the rough cliffs and the beautiful sea. Beautiful and cosy towns like Lorne, Apollo Bay and Port Fairy are ideal to relax shortly and to grab a sandwich or something to drink, in case a break is needed. My plan was to see the highlight of the GOR at sunset – The Twelve Apostles. Of course, I took too long and underestimated the time needed to get there… Even though I was trying to speed up when realising it was getting slightly dark (this must have been the reason for the fine actually :). I missed the attraction by 30 minutes and decided to stay in the Port Campbell Hostel, an amazing place to meet travellers from all over the world, to enjoy a pizza (not the best I ever had) and self brewed beer. An amazing day ended and I was already looking forward to the next episode on the following day.

Early in the morning I got up to see the sunrise at the Twelve Apostles and was amazed by the stone formations gazing in the morning lights. Not surprisingly and a bit frustrating, such a beautiful location also comes along with a lot of tourists. On our travels we “surprisingly” always encountered two significantly outstanding groups of tourists. Chinese… and Germans… the later ones don’t challenge themselves at least with their huge selfie sticks. It seems that posting selfies and the fact to spread the message of being at such a cool destinations is more important than enjoying the moment. I tried not to get distracted too much and was trying to look for not too crowded places where I enjoyed the views and took some pictures.

Along my way to port fairy were a lot of amazing places to visit and I wished to have had more time to fully enjoy these breathtaking sceneries. Stopping at the various “attractions” I found also my Chinese friends again, battling with their drones in the air and their selfie-sticks at land 😀 It reminded me more of a race who is getting to the next stop faster… Anyways, I absolutely enjoyed also this part of the trip and did some short walks to secluded beaches and rock formations.

Enougher highlight of the trip was the whale watching platform in Warrnambool which is a must do, even though I did not see a single whale 😀 It is just such a zen place where people are having picnic on the beautifully built wooden platform until eventually a whale would show up. Instead of a whale I met “Jack the Fox”, a musician from Melbourne who used to grow up in the Warrnambool area. We had a lot to talk about and he gave me quite a lot of recommendation what to do and where to have lunch 🙂 Before leaving with his girlfriend, he gave me his newly produced CD which I was playing up and down for the rest of my road trip. Thank you again “brother”, it is just great to meet so many people along the road. Keep on living your dream!

After I was following the recommendation for lunch in port ferry I decided to pay a visit to the tower hill reserve for doing a short walk in the nature.  I still did not see a single Koala and was already a bit disappointed especially since no whales showed up earlier on, too. During the walk up a hill where I had a beautiful view over the nature reserve I even missed a kangaroo according to one of the many people doing their daily exercises. Disappointed I already saw myself on my way back to Melbourne when I suddenly saw a little koala bear sitting in the branches of a big eucalyptus tree. My day was made and I still keep on remembering this amazingly beautiful and cutest animal ever.

Listening to “Jack the Fox” and driving towards the golden sunset along the road, the day finished in Melbourne again. The next day another epic road trip was waiting… The Coastal Highway from Melbourne to Sydney (read the article here).

Some pictures from the Great Ocean Road and Surroundings