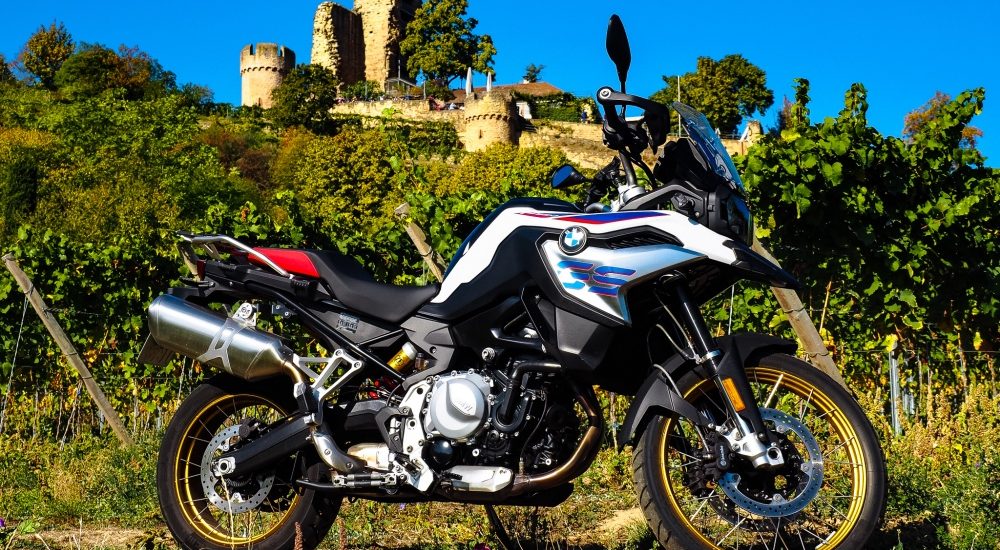 It is 9 am on a Saturday morning and I pick up my motorbike at Klaus Mayer BMW Mottoradshop in Mannheim. My plan is to ride the Deutsche Weinstrasse, one of Germany’s most scenic routes and to combine it with a review of the BMW 850 GS!

I start the engine of the BMW 850 GS and I immediately get goose bumps. What a sound, what a symphony!!! Even before starting to ride this beauty I know that I won’t get disappointed.

“One of Germany’s oldest touring routes, the Deutsche Weinstrasse was inaugurated in 1935. It traverses the heart of the Palatinate (Pfalz) – a region of vine-covered hillsides, rambling forests, ruined castles, picturesque hamlets and, of course, exceptional wine estates. It’s blessed with a moderate climate that allows almonds, figs, kiwi fruit and even lemons to thrive.” Lonely Planet.

Everything is already prepared and I simply press a push-button to get my adventure in Germany started.

Before I hear the symphony of the engine and exhaust, the TFT display starts to cast a spell on me. It reminds me of a Startrek episode and is a technological master piece I could watch and play around the whole day even without riding the bike, lol.

To be honest I did not expect such a massive difference between the 700 GS and the 850 GS but there is absolutely no comparison at all!

The 95 horse powers in combination with the 853 ccm twin engine continuously shouts out for more with each meter on the road. It is just difficult not to play the whole time with the throttle… It left a huge smile on my face from the beginning to the end.

With 860 mm of height, the 850 GS is significantly higher than my 700 GS and I struggled initially with putting both feet confidently on the ground (I am 172,5 cm in height ;). After a while I got used to it and used either the right or the left foot to find my balance. I could imagine this might be an issue off-road or when trying to push the bike back on slightly elevated roads. I hope this will be my next test challenge 😀

Furthermore, the tank is not anymore below the seat but at the front of the bike which again might be an issue for balancing out the bike for offroad use. However, if you are not a hard core offroad rider, I am pretty sure this might be neglectable.

I loved the super smooth clutch and the various driving modes from “road” over “dynamic” to “enduro”. Most of the time I was driving the dynamic mode though since I did not touch any dirt (unfortunately) :p The super cool LED lights were surprisingly very bright at night and offered an amazing visibility.

For the geeks, read here more about the technical specs 🙂

Since the weather was absolutely stunning I decided amongst others to ride down the German Wine Route from Bad Dürkheim in Rhineland Palatinate to Wissembourg in France.

Just to stress it out, The “Deutsche Weinstrasse” or L516 is not a motorbike “racing road” like “Hesseneck” or “Johanniskreuz” but a relaxed and scenic ride along one of my favorite German areas.

“The wine-growing region Rhineland Palatinate is with approx. 23.500 hectare acreage Germany’s second largest cultivation area. It runs south of Worms to the French border and from the slopes of the Palatinate Forest to the Rhine plain.”

Looking at google maps you could do the trip within 2 hours but seriously… If you did it within that timeframe you missed the purpose of the German Wine Route. Ride. Relax. Enjoy. Ride. And so on…

According to the motto of the wine region, “Zum Wohl. Die Pfalz.” (translates to “Cheers. The Palatinate.”), it is a must to stop at least in one of the many extraordinary wineyards to enjoy one of the world’s best white wines – The German Riesling (or alternatively a Traubenschorle, a mixture of grape juice and sparkling water :).

Starting my trip in Bad Dürkheim, I made my first stop in Wachenheim to visit the famous castle “Wachtenburg”. “The spur castle on the Schlossberg was probably built in the 12th century under Konrad von Hohenstaufen, a half-brother of the famous emperor Barbarossa.” (read more). The area has been voted as one of the most beautiful in the German Wine Route.

Shortly thereafter I visited the lovely town of “Deidesheim” with its more than famous top restaurant “Deidesheimer Hof”, where the former German chancellor Helmut Kohl was charming his international guests over the typical German food speciality “Schweinemagen” and what else – a glass of Riesling wine 🙂 Deidesheim was founded around the 10th century on the former Roman mountain road and definitely belongs to one of my favourite towns! Not to forget the famous wine festival which is held every year around summer time. Read more.

After strolling through the romantic little streets and enjoying the wonderful atmosphere at the town square, it was about time to meet some important German history. Next stop on the route was the “Hambacher Schloss”. “In 1832, The Hambach Castle became the “cradle of German democracy” (Theodor Heuss) and a demonstration of national unity and freedom”. Read more. If you are less interested in the history and the exhibition about the German history, have a glass of wine at the beautiful outdoor terrace just next to the castle and enjoy the view over the Rhine Plain 😉

Enough of short stop overs, I continued my ride and came to the South of the German Wine Route – Südliche Weinstrasse – which starts at Maikammer and leads to the German Wine Gate and finally to France. For me, this is the most beautiful part of the route and has everything to offer a Biker’s heart needs – beautiful roads, great landscapes, cozy little villages, romantic castles, impressive fortresses and much more. Check out the 15 highlights of the “Südliche Weinstrasse” here.

Last but not least, I decided to slightly extend the German Wine Route and made my final stop across the border of France in a charming little village called Wissembourg. At this time of the year, one can enjoy the famous “new wine” together with the Alsatian food specialty “tarte flambé” – a sort of Pizza, French Style (they will kill me when hearing that, lol).

“Wissembourg is  not only the “Gateway” to France but is also one of the gateways to the “Parc Naturel Régional des Vosges du Nord” (Northern Vosges Regional Natural Park).  The sector is classified since 1989 “world Reserve of the Biosphere”. Since 2008 the city  also awarded the label of 100 “most beautiful detour in France” including through all France, tourist areas of charm to be discoverd.” Read more.

At the end of the day, I did not only explore one of the most beautiful regions of Germany and France but also had the pleasure to combine it with a review of the BMW 850 GS.

In my opinion, there is no better way to explore the Deutsche Weinstrasse than on a motorcycle! What is your favourite motorcycle route in Germany? Leave me some comments below…

After I had to leave unfortunately “Fury” this year in Brazil behind, it was about time to try out new adventure motorcycles on the market. What could be better than to test ride the top model of BMW Motorrad and wanted to share my review of the BMW 1250 GS Adventure with you.

“To live is the rarest thing in the world. Most people exist, that is all.”