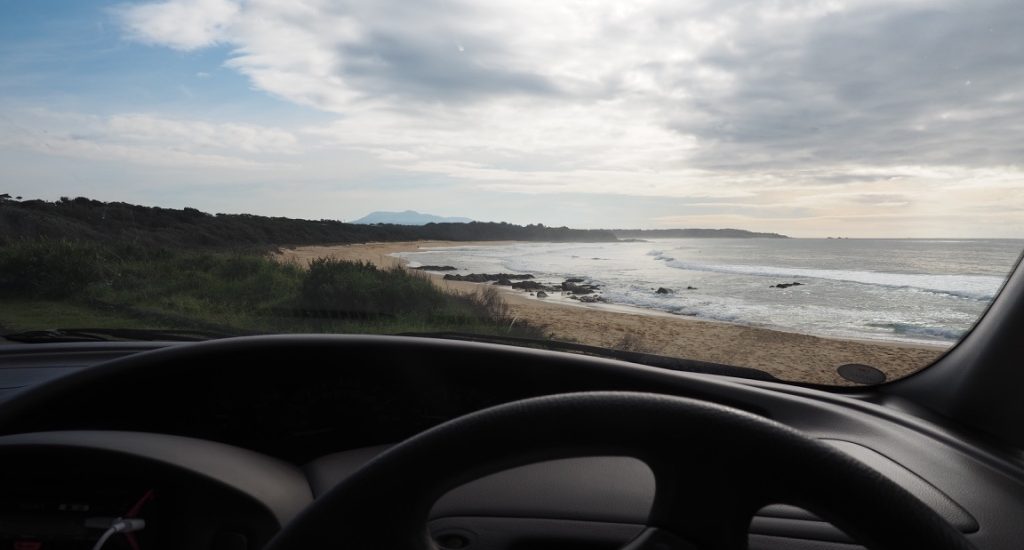 The day after I finished the GOR, I was already on my way to approach my the next road trip. Not as famous as the Great Ocean Road but still enjoying a high reputation as a beautiful trip from Melbourne to Sydney, I negotiated a deal with the devil. A devil called “Juicy Rentals”… 1 AUD per day… this is what they were offering including a complete tank full of gasoline. It couldn’t be better! I just had to be in three days in Sydney… piece of cake 😀

The trip started already great while the shuttle bus driver did not manage to open the door of the van when arriving at Juicy’s rental. Obviously the guy was lost and did not know what to do anymore… engine off… engine on… closing doors via remote… opening doors via remote… closing doors with key… opening doors with key… nothing really worked. The door stayed closed as a magic spell would have been put on the door. “Luckily”, all our backpacks were in the back of the van and we were stuck. After 10 minutes I was not bothered anymore to wait and thought it would be wise to use the “wasted time” to already check in and get the rental car. I went straight into the office and arranged smoothly the hand over of the “most beautiful van” in flashing brightly green and purple. If I did not raise awareness so far to be a tourist, I had all eyes on my for sure the next days, lol. Great… Anyways, while doing the handover of the car I realised that the shuttle bus driver managed to somehow open the trunk and was already on his way back again to the airport. I swiftly walked back and found my backpack on the street… great, what an a*%&?!, he could have put the backpack at least into the store. The other backpackers could not care either. Anyways, I had my backpack and I had my car… German efficiency multiplied by years of experience in Switzerland, lol. I was happy… UNTIL I found out that most likely my backpack caused the problems of the trunk. One of the straps obviously got stuck into the mechanism of the door and could only be opened with violence after all. This resulted in my strap being ripped off… GREAT! I only found out about this after a couple of days since I did not carefully check my luggage and a call at the “Devil’s” customer service resulted in the statement that the shuttle service would not belong to Juicy and I would either need to clarify directly with them or just report it to my travel insurance. The 1 Dollar deal a day got suddenly a bit more expensive… for obvious reasons. Sweet…

Anyways, at this time I did not know anything about my luck and was already on my way to the coast. The first part of the trip lead me through beautiful sceneries in the country sides with a lot of green, hills and farms. They got surprisingly pretty fast boring and I just wanted to get to the coast… I got apparently spoiled by the GOR while I was constantly driving along the coast without having to deal with choosing the best option of the route. This was here obviously different and shall remain true for most of the part of the trip. In case I wanted to explore more of the beaches and coast lines it was always necessary to take time consuming detours.

My first destination at the end of the day was Lake entrance where I was staying in a lovely AirBnb with a room which reminded me more of a junior suite in a luxury hotel. Amazingly comfortable bed with electrical heating mattresses under the bed sheets, a terrace with view over the beach and sea and… and… I still dream about it… a bath tub!!!!!!! OMG, a bath tub! The first thing I did was to fill it up with hot bubbly soap water and deep dived for the rest of the evening in my well deserved dream, washing off all my sorrows. It felt great… I lighted up a couple of candles and even a candle with an evaporating scent on top accompanied by some decent music. The perfect finish of a long day.

The next morning I started early with an amazing breakfast and full of strength I continued my road trip with my first stop in the beach town Marlo. Already at the beginning I was super lucky to see a so called Kookaburra, a terrestrial king fisher, sitting on a gate on my way to the beach. Many other bird species were observable in the area… and the most impressive of all was the mighty Pelican spreading his wings just above me and landing in the water. A majestical animal which I would have loved to explore more. Anyways, as I was continuing my journey I saw a couple of cars parking at the side of the road and people were watching at the sea with their binoculars. Weird, I thought and stopped my car as well in order to find out what the heck was going on. Apparently, a ship was hitting the beach the day before and the coast guards were trying to free it up. Ok, for the locals it must have been a truly exciting situation but for me it was more of a disappointment… until out of nothing… a majestic humpback whale was jumping out of the water and dived with all of his massive weight back again into the water, causing a huge wave on the surface of the sea. WOW! My first whale I encountered in Australia and with such a spectacular show… it could not be any better! One of the locals told me he was spotting some more whales at Cape Conran and I made excitingly my way up to the location where the friendly local recommended me to go. The place was beautiful… a long beach and lots of rock formations in between… After 20 minutes of observing the sea I thought I would have seen something in the water but was not really sure. After 40 minutes I got bored and gave up, returning to my car when I saw again something in the water. A fin… clearly a fin… a bloody large one to be honest. Thereafter two large humpback whales emerged at the water level, most likely an adult and a juvenile. Both were playing with their tales and lifted them up high in the sky and crushed them violently back again in the water. I was speechless… I never saw anything like that before. Just a couple of meters in front of me were whales showing off for just themselves… and me. I felt small in the world and was overwhelmed by the beauty of these majestical species. Simply beautiful… I did not find any words to express how I felt but it was truly something extraordinary and a true wonder of this world. We have to protect these species I thought! No matter the price…

I spent quite a while observing the whales but had no other choice but continuing my journey if I would still make it within three days to Sydney. I did some detours to the beaches at the Coaiingolong National Park which were amazing and almost no one was there either. The roads started to be more like gravel or dirt roads instead of properly paved roads and the loneliness of the area made me feel a bit nervous. Still I kept on going and arrived finally at the most beautiful secluded beaches I have ever seen. Wow… all of a sudden I regret I only took 3 days for my trip to Melbourne to Sydney. The wildlife… the beaches… the nature… it was just overwhelming!

And it just did not stop… I stayed overnight in Merimbula and continued my drive early next morning again to discover the jewel of Australias east coast beaches… along the sapphire coast. I can’t find words for those beautiful landscapes and again… why did I only plan in 3 days for this trip. Such a shame… I just wanted to stay much longer, enjoy the beauty of the nature and the loneliness of the beaches. Just a couple of kangaroos were hopping here and there from time to time. I knew at this point already I would be coming back again.

Another cool location was Bermagui where a swimming pool was built into a natural stone formation just next to the sea. It is in fact called blue pools because of its colours beautifully shining in turquoise and crystal blue, while swimmers are competing in summer for the best track. At this time of the year it was unfortunately to cold to take a swim… but again… unbelievably I saw humpback whales jumping out of the water… making their way up to Sydney, just like me. I observed them again and just could not get enough… again… WHY…ONLY… 3… DAYS??!! 😀

Just before Sydney the yellow light of my gasoline lamp started to flash repeatedly. Sh%&t… I will not give them a single cent more than necessary I thought. I was calculating the milage I still had to do while filling up the tank the last time. Hopefully it was the right calculation and I would not break down on my last meters before the finish line… I was pretty nervous but risked it… All in! …and I made it, lol!!!! There was for sure not more than 2 litres in the tank and I made the best out of my situation… Suck!*s! :p

An amazing road trip ended after 3 days and I was finally in Sydney. Sapphire Coast… I come back! Next time with my better half!!! 😀

Some pictures from the Coastal Highway, its magnificent beaches and amazing wildlife

The Coastal Highway - From Melbourne to Sydney in 3 days

“To live is the rarest thing in the world. Most people exist, that is all.”