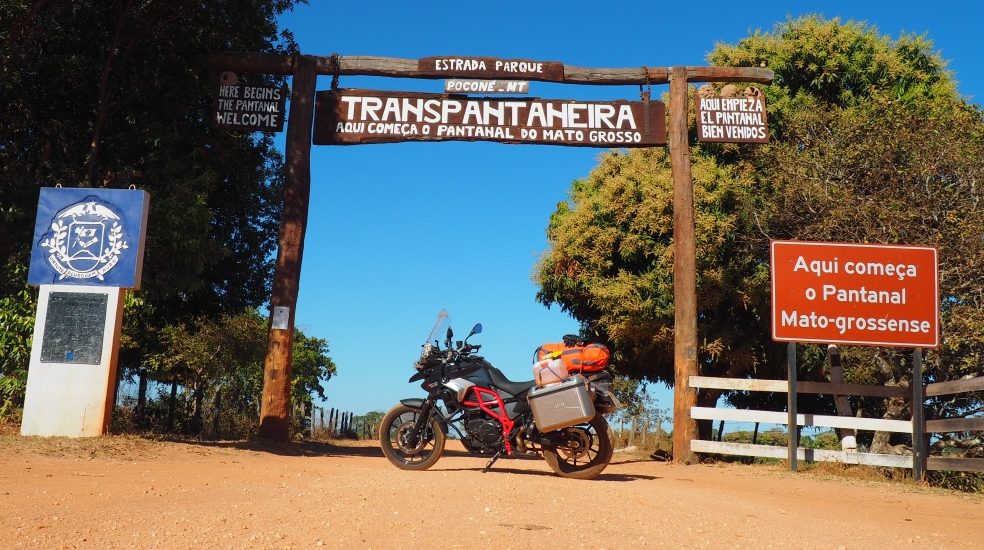 The famous Transpantaneira. I was finally there, after I spent one night in the small town of Poconé where I really just relaxed and wrote a bit on my blog. Honestly, there was nothing else to do but to get prepared for the trip to Porto Jofre, a tiny fishermen village 150 km further South, deep in the Pantanal.

The Pantanal is the world’s largest wetland, pooling over 81,000 square miles (210,000 square kilometres)…in the center of South America, mostly in central-western Brazil and straddling the borders of Paraguay and Bolivia. Often overshadowed by the Amazon to the north, the Pantanal quietly harbors the highest concentration of wildlife in South America. It’s part national park and part UNESCO World Heritage site, and it’s considered a critical region of the world by the World Wildlife Fund, which estimates that 325 species of fish, 159 species of mammals, 656 species of birds, 53 species of amphibians, and 98 species of reptiles live in this hotbed of biodiversity. National Geographic.

The first part of the road was not very pleasant to drive and challenging due to many sandy stretches and gravel here and there. I had to get used to the way of driving under such demanding conditions. From time to time I would be driving from the far right to the far left and then back again or even stayed in the middle of the road, trying to find the perfect or the least risky line. Apparently, there are more than 100 wooden bridges to cross along the way, all in a more or less acceptable condition, meaning there were many missing blanks, rusty nails and metal straps to overcome. I had to fight with my mind, constantly picturing myself with the first puncture and how I would manage the situation.

Of course, I bought the emergency kit for my tubeless tires but besides some simple explanations from the 17 year old sales assistant I did not really know how things would work. Theory and practice are many times two different pair of shoes. So, I promised myself to check out some youtube videos as soon as I would be having internet connection again. At the same time I had to think about how to lift the bike up in case of struggling with the sand and falling possibly down, which was unfortunately a possibility. I remembered my last accident with my previous motorbike, a Kawasaki ninja with more than 220 kg of weight. Not so easy… Another youtube video I should check out asap, I thought.

However, After a while I started to enjoy more and more the scenery but not without neglecting the road. As I watched my cockpit, I could literally observe the temperatures inclining by every minute. While starting my trip, the temperatures were around 24 degrees Celsius still comfortable but would increase at midday to around 36 degrees. My heavy motorbike clothing made the heat furthermore not really more comfortable to deal with. On third quarter of the road I finished already my three liters of water and had to survive for the last kilometres with the hope nothing would happen.

Crazy pickup drivers were passing by from time to time, throwing lots of stones in the air and what was even worse, leaving a huge cloud of dust behind. The problem was not the dust in terms of inhaling it (even not really pleasant and not the best for my health) but the limited to not existing visibility of the road. It made it impossible to continue driving and I had to keep my fingers crossed not to drive through deep sand. Later on, I would completely slow down or even stop when things got “complicado”. Complaining to the drivers and giving them hand signs to slow down was completely ignored and I had to  completely give up my German mentality and learn how to live with it. I still kept on swearing… lol.

The road revealed beautiful landscapes on both sides of the Transpantaneira as well as plenty of birds and other wildlife. At one point, I saw something laying on the far right of the road and the closer I came I realised it was a cayman! A cayman laying directly on the road… At this time I did not know that this kind of species tends to be less aggressive and rather runs away when coming closer (not like other species, I knew could be dangerous for humans). I passed the reptile and encountered many more caymans next to the road. There were basically everywhere, ranging from small 50 cm to approx. large 2,5 meters big monsters, with wide open mouths showing their frightening teeths. Either the road kills me or the bloody caymans, I thought, lol.

Now, I shouldn’t complain since I was meeting Milton in the middle of the Transpantaneira, a cool Brazilian adventure dude trying to master the road on his bicycle. We came to the same conclusion regarding the terrible conditions of the road and exchanged recommendations on how to drive best. He also told me that the last part of the road would be the most challenging with REALLY deep sand. Great, another challenge would be waiting for me just before the finish line (which I mastered luckily).

Continuing my ride, I saw besides caymans plenty of other different, colourful bird species which were living in peaceful coexistence with the reptiles. Furthermore, I never saw so many different king fishers at one place and it got almost “boring” to encounter them after every bridge, lol. The abundance of animals was surreal and I was already looking forward to explore more of it in Porto Jofre, where I booked a two day Safari with a private guide.

When finally arriving after 6 hours at the tiny fishermen village, I was absolutely exhausted and totally dehydrated. A big jar of fresh lime juice was just the perfect finish for an adventurous day trip like this.

Where to Sleep in Porto Jofre

My guide recommended to stay in Pousada do Neco, which was a simple accommodation without a garage but including great food. Since we were in the middle of nowhere I had no worries to be robbed and simply secured Fury with my lock. There are a couple of other accommodations in Porto Jofre across all different categories, most of them not listed on booking.com. My recommendation is to get there around midday and choose according to your preferences. It is also possible to negotiate prices…

In particular I liked Santa Rosa Pantanal. Hotel Pantanal Norte is quite popular too and it offers Jaguar safaris with knowledgable guides too. However, when I tried to call them in advance for prices they always referred me to a travel agency with exaggerated prices. Check here how I booked my Jaguar safari.