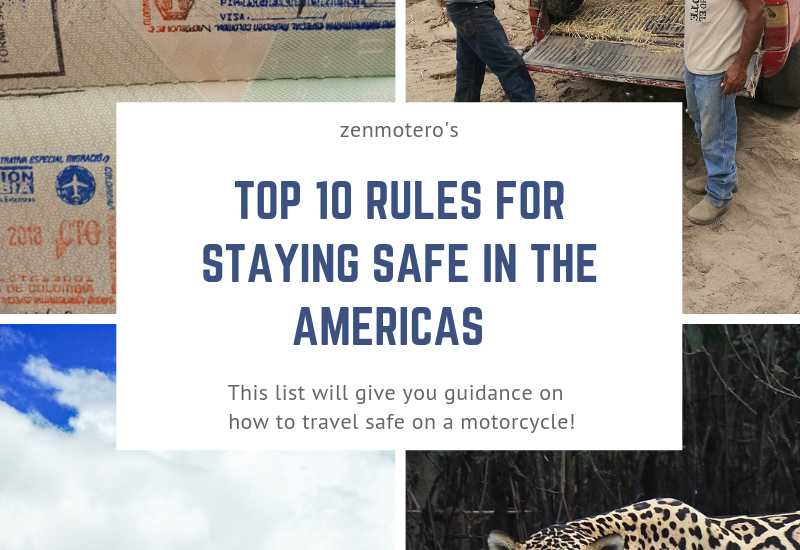 I still remember the first reaction of my family and friends when I mentioned my plan to travel the Americas solo on a motorcycle. “OMG, are you crazy? Those countries are so dangerous, don’t do it…!”

Have you ever seen the movie “Jaws” and went straight after into the sea? Exactly… we are afraid and hesitate because our mind is telling us to stay in our comfort zone. Is our mind right? Well, our behavior is deeply anchored in our primeval reaction in regards to danger or stress and we usually react with a human pattern of fight or flight. In some situations it is of course useful and in others not.

Going on adventures always means to leave the comfort zone and to possibly encounter risky situations. It would be naive to think there is no risk involved when undertaking an adventure like overlanding the Americas. The key to stay safe is to be aware of possible risks and to get prepared in advance.

In this article, I am sharing my personal experiences (21 months traveling/ living pre-dominantly in Latin America) to lower the risk of traveling solo during a motorcycle trip across the Americas.

Rule No. 1: Stay in Stealth Mode

“In 2018, Latin America retained the ignominious distinction of being home to most of the cities on Mexico’s Citizens’ Council for Public Security’s annual ranking of the world’s most violent cities”

Keeping that information in mind helps you to put your guards up whenever traveling through a large city in the Americas. I personally learned to be constantly aware of my surroundings especially when things went terribly wrong in a favela of São Paulo. Read my story here.

Ever since I was extremely cautious when traveling though larger cities. A mistake everyone should avoid doing is to show off. Meaning, don’t wear any jewelry, watches, fancy designer clothes, cameras, mobile phones, laptops and so on in public. As a foreigner you are already a target… Therefore, “no dar papaya“, as Colombians would say – meaning don’t give someone the opportunity to take advantage of you.”

I know, I know. This should be on everyone’s safety list but it happened already to everyone for whatever reason, me included. Riding at night! You should never do it for obvious reasons. Road conditions in Central- and South America can be already terrifying at day time, not even talking about the night. Either you stumble across deep potholes, missing drainage lids, dead ends and road works, terribly drunk drivers or even animal crossings.

Install additional lights which helps to improve visibility during night and any other adverse weather conditions.

According to DuPont and Steffen (Textbook of Travel Medicine and Health. Philadelphia: B.C. Decker, 1997) the highest risk associated with traveling is not because of poisonous animals or infections and diseases but of deadly traffic accidents. Therefore, be extra cautious and always ready to break!

Rule No. 3: Be careful in large cities, traffic and off-road (sand, mud, gravel or dusty roads)

Pick up- or truck drivers don’t care about motorcyclists, all they are interested in is to get as fast as possible to their next destination. Motorcycles usually don’t play an important role as traffic participants. Therefore, I had to stop or make way several times either because a truck took over from the opposite lane and expected me to do some magic (“vanish”) or because I had to cope with gravel falls and huge clouds of dust.

In the worst case, stay calm, make way or stop the bike until visibility is clear again.

It might not be a bad idea to take off-road classes. I did not do one and had to learn everything from scratch by myself. Well, you can guess what happened from time to time. Ouch!!

At traffic lights in large cities, try not to be the first one in line and stop just behind a car to reduce the risk of motorcycle-jacking. In the neighborhood of Belem’s harbor I did not even stop at red traffic lights because I felt highly unsafe.

Furthermore, stay on principal roads in large cities and never ever enter a favela. As soon as you realize to have made a wrong turn, get back immediately! In 2016, a GPS navigation system led an Italian motorcycle rider into a favela of Rio de Janeiro and got shot dead.

Rule No. 4: Distribute your valuables

It never happened to me but pickpocketing and robbery are a possibility. Therefore, I always distributed my valuables and carried them in a waist- and cloaks purse. Furthermore, carry a “fake wallet” including a few amount of cash and copies of ID and expired credit cards. This might not just be a solution for pickpocketing or robbery but also in case of corrupt police.

In Ecuador, I got stopped by corrupt police men who expected me to give a bribe. They kept my ID for 30 minutes and luckily let me go after I pretended not to understand anything.

Rule No. 5: Be extra cautious in public

Keep your eyes open for strange people. Cross the streets in case you don’t feel comfortable and listen to your gut feelings.

Don’t walk alone in the night in unsafe areas and ask locals or your accomodation to circle in “no-go areas” on your map.

Rule No. 6: Withdraw cash inside a bank, mall or a lockable cabin

Make sure no-one is following you or is suspiciously waiting at a corner while you try to withdraw cash from an ATM. Preferably, go inside a bank, a mall or a lockable cabin where the risk of getting robbed is significantly lower.

Drink alcohol responsibly. I never (okay maybe once, lol) got wasted in a bar or a club and could not remember how I got home. When you might be alright somewhere on the countryside, it can be quite problematic in larger cities. You will be an easy victim.

Go to the official taxi reception desks at airports (tell them where to drive, they give you a sheet of paper with the address on it and the taxi number, pay either directly with credit card or pay the driver directly) or call directly an UBER.

Don’t take random taxis on the road. Instead, ask a waiter inside a restaurant to call an official taxi or call an Uber while waiting inside the building.

In case you might have no other option than to take a random taxi, Tell your friends where you go and send a picture of the license plate.

Rule No. 9: Be flexible and change plans according to local conditions

Weather can change rapidly especially in mountain regions like the Andes. Be prepared for heavy rain, fog and therefore low visibility. Have always a safety vest with you.

While hundreds of people were killed during political unrests in Nicaragua I had to carefully cross the country while asking local people for advice. Always be ready to change plans according to the local conditions, be it weather, political, scenic or seasonal.

Latin America is certainly still behind the standards of developed countries like those in Europe for example. Therefore, it is important to adopt to the “local standards” and never insist on your “right of passage”. A thing as such does not exist and the sooner you accept and adopt the longer you will enjoy your travels.A lot of people traveled already the Americas and nothing happened especially when respecting the rules above. However, it does not come without a certain risk of which everyone needs to be aware of.

If people are not willing to take risks in life we would have not landed on the moon either. True adventurers calculate and accept a certain amount of risk before hitting the road, e.g. the death road in Bolivia.

Overlanding the Americas belonged to my personal all time highlights and everyone should be putting this stunning continent with its amazing culture, history, people, nature, wildlife and landscape on the bucket list! Read here all about my personal life learnings.

Travel safe and leave me a comment in the field below. Anything to add? What is your opinion and your personal safety rules to stay safe in the Americas?

“Do something worth remembering.”